The Industry Lab is home to a dizzying array of talented tenants: young singer Anjimile, who records folk songs; cinematographers; startup robotics and medical equipment; expert of a law firm in the field of intellectual property; postgraduate student engaged in research; and software developers to name a few.

The Industry Lab is one of more than a dozen coworking and incubators in Cambridge, operations that are largely invisible to the public but vital to Boston’s success in developing innovations in areas such as biotechnology, robotics and 3D printing. 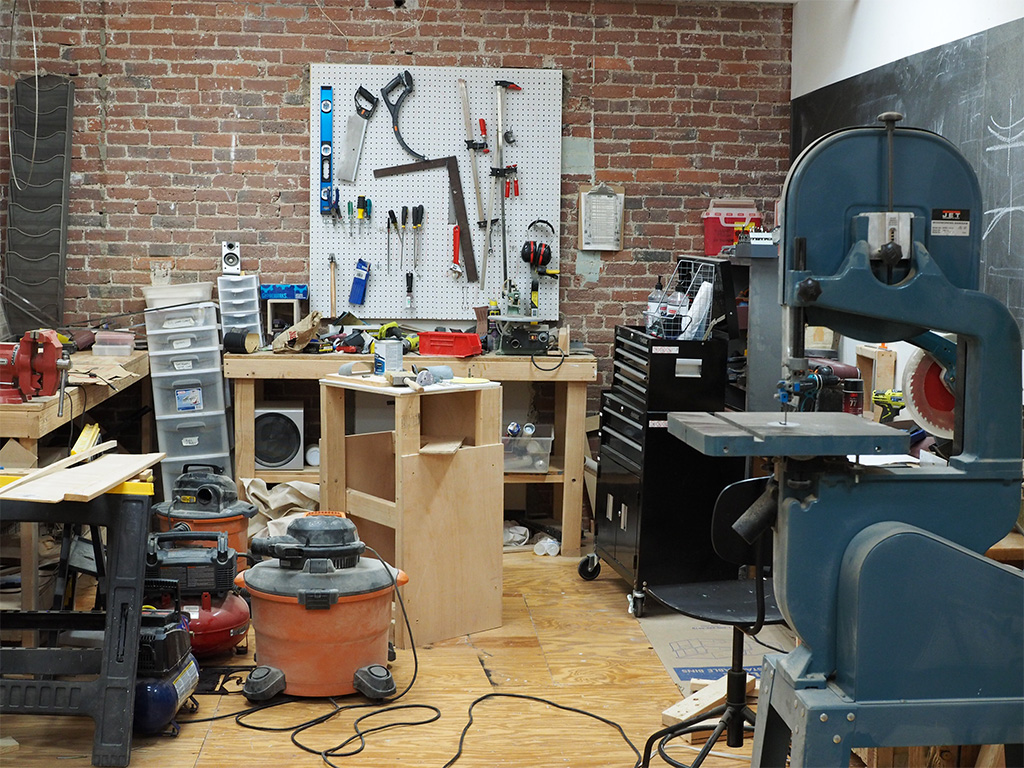 The Massachusetts Institute of Technology alone produces 450 startups annually, and the Harvard Innovation Lab (i-Lab) serves more than 500 students annually, universities say. Coworking spaces give them somewhere to go and develop. Formlabs, a manufacturer of 3D printers, was founded by three MIT students who rented space at the Industry Lab, for example, more than a decade ago, and now has its own offices in Somerville and 500 employees in more than half a dozen countries.

Founded in 2011 at 288 Norfolk Street, Wellington-Harrington, with enough space for about 130 people, Industry Lab recently added a building at 1280 Cambridge St., which will eventually house another 100 people closer to Inman Square. . The Industry Lab operates approximately 17,000 square feet in each of the centuries-old brick industrial buildings. 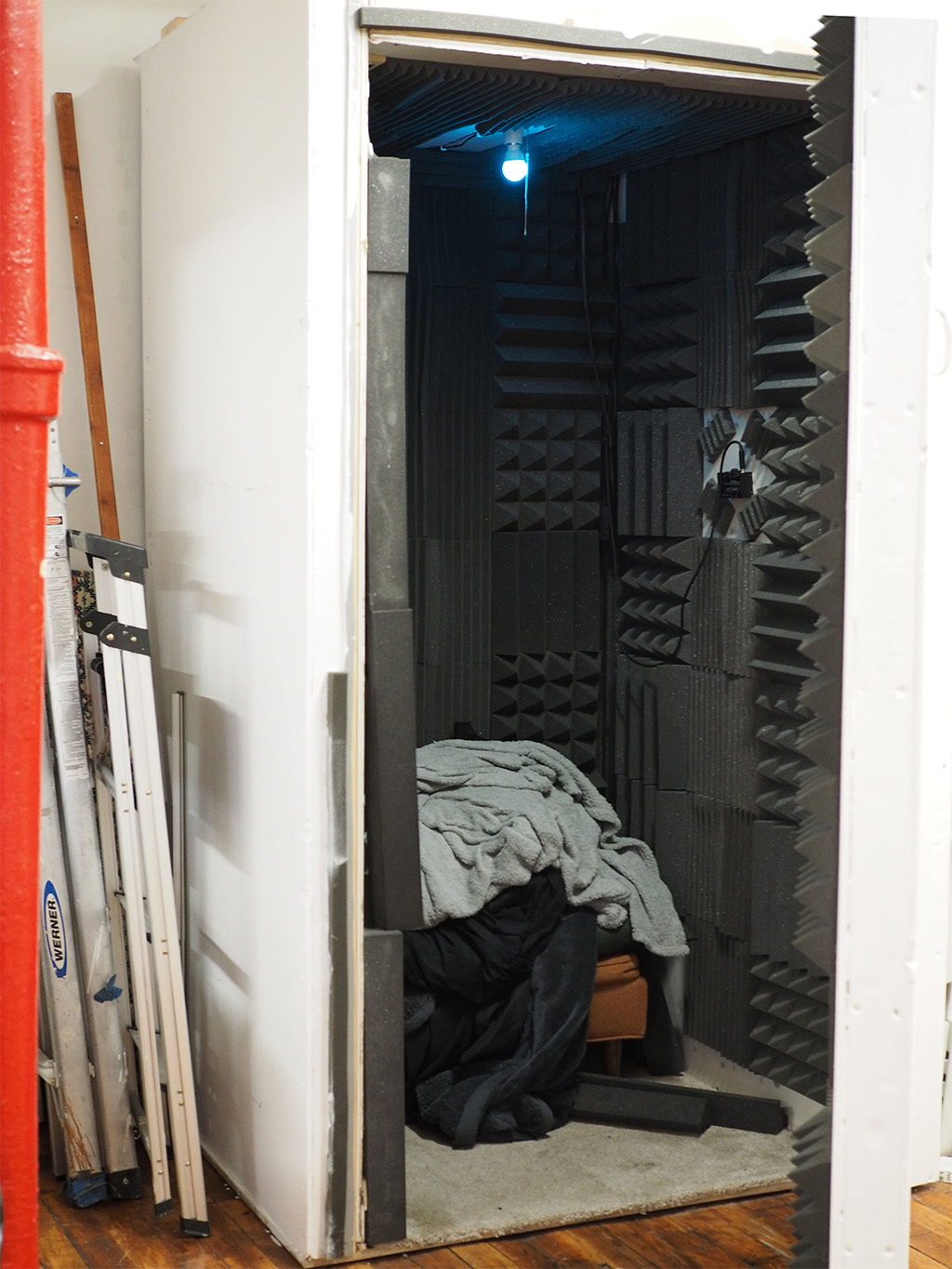 An anechoic camera, used as a recording or meditation studio, at the Industry Lab. (Photo: Andy Zucker)

Inside the Norfolk Street building there are tables, conference rooms, kitchens on each floor, boards, sculptures, paintings, laser cutters, 3D printers, robots, a small anechoic camera with foam, which serves as a recording studio and sometimes a place for meditation. , venues for events and a well-equipped machine shop, available to all tenants. The second building will soon have a library. Tenants range from freelancers to companies with up to 25 employees. Some rooms are private, but most residents work in large rooms, sharing space with others. 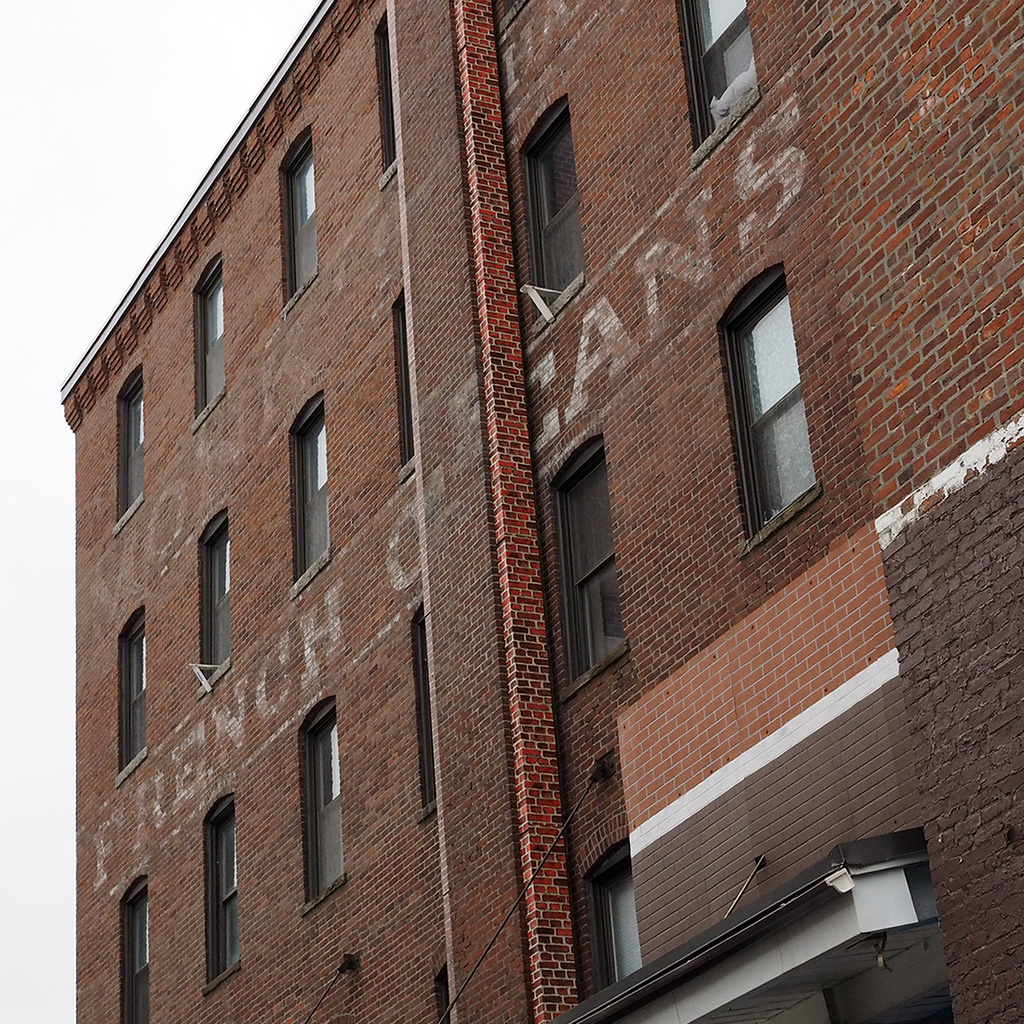 The Industry Lab takes up space on Norfolk Street, which was once a dry cleaner’s so-called “French” on the building’s side because the dry cleaner was developed in France. (Photo: Andy Zucker)

In 2009, Andrew (AJ) Meyer and three of his colleagues formed a company called LeafLabs when they were at the Massachusetts Technology Center. Meyer founded the Industry Lab in part because the LeafLabs team graduated and the company needed a place. LeafLabs, which develops hardware and software for specialized computer applications, is now a multimillion-dollar business with 25 employees.

Meyer decided to add a second building to IL because he found that as companies grow more than 10 employees, they have different needs. The building at 1280 Cambridge is designed for that, Meyer said, and now includes LeafLabs, Pickle Robots (the second of Meyer’s technology startups, also with 25 employees) and several others. Host Nai Nan Co. became a partner.

Works in the Industry Lab 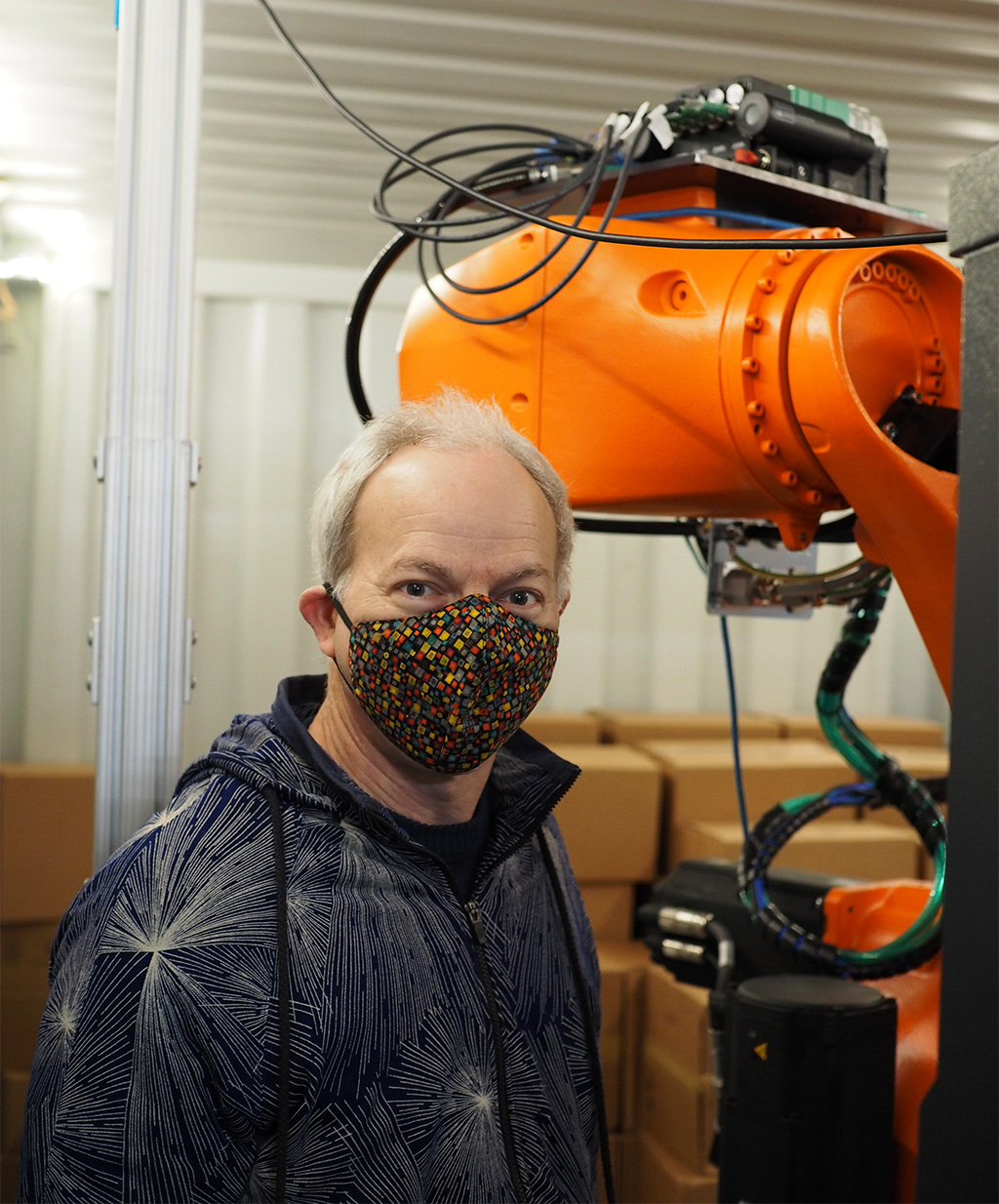 Chris Fitch of Pickle Robots, a tenant of the Industry Lab, with equipment known as the “Big Dill”. (Photo: Andy Zucker)

Meyer believes that collegiality and the exchange of ideas that take place in spaces such as the Industry Lab are important for supporting the community and for the flourishing of innovation. According to him, many long-term friendships have been established between its tenants, and many creative ideas have been formed based on the ties established there, including a multimillion-dollar engineering project in which more than a quarter of tenants participated at one point. Community-building activities sponsored IL almost weekly before the pandemic. The Industry Lab website also promotes its community by providing information on dozens of current and former tenants representing more than 700 residents.

Another Meyer belief that sets the Industry Lab apart from other coworking spaces in Cambridge is that people involved in art and technology benefit from spending time with each other. Artists were among the tenants from the beginning and created the exhibited works. Judge McDaniel, who manages both buildings, was first associated with the Industry Lab through a program of residencies for artists, worked without rent and organized a show of his work there. 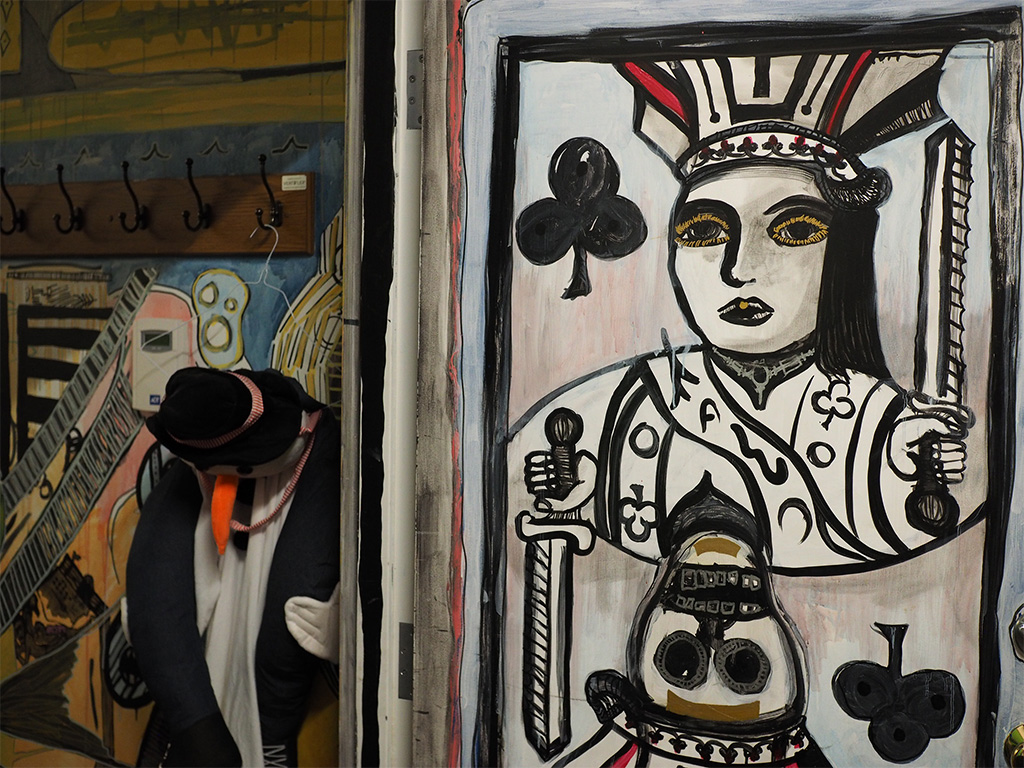 Paintings of tenants in the Industry Lab at Norfolk St., 288 (Photo: Andy Zucker)

Another distinctive feature is that Meyer interviews potential tenants and oversees the premises, renting out only to people he trusts, and strives for diversity in the work they perform. No lockers; tenants undertake to respect each other’s property.

Tenants – or residents, as Meyer sometimes calls them – have the opportunity to paint walls, drill holes or make other changes to the leased area, provided they respect building codes and common sense. “You don’t have to feel valuable in the building. You are here to do whatever you are going to do, and if you want to paint on the walls, fine, ”Meyer said during a visit on February 1. He said he learned this approach in Building 20 of the Massachusetts Institute of Technology, an incubator space built as a temporary structure during World War II where residents had the opportunity to make changes to suit their needs. 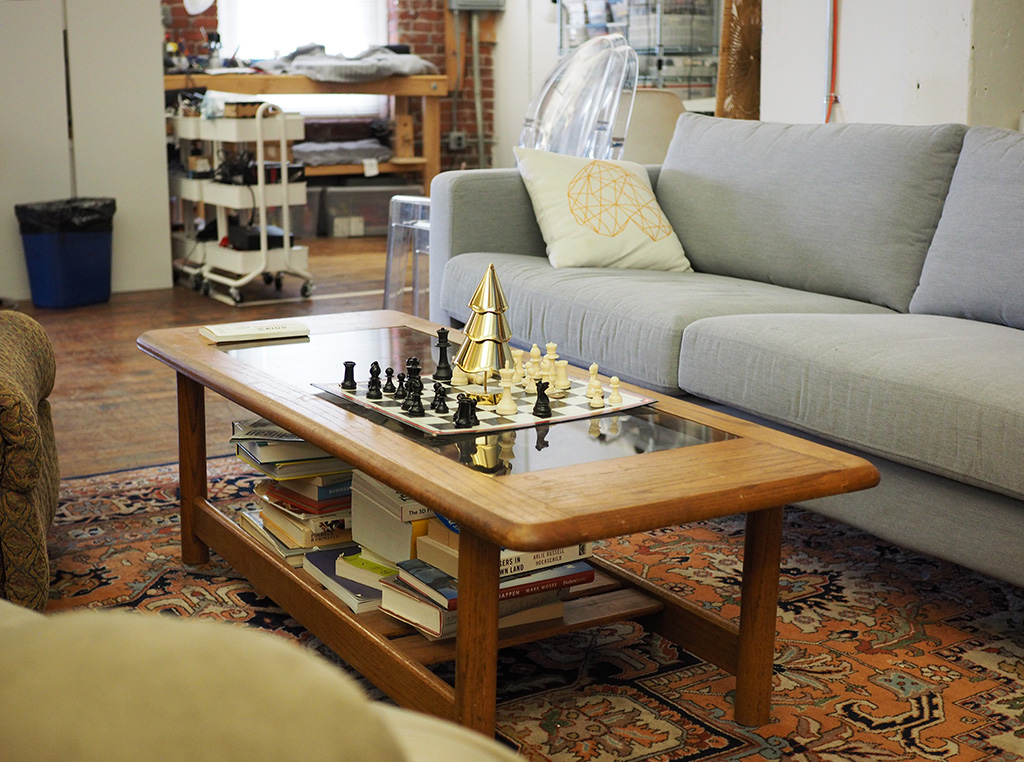 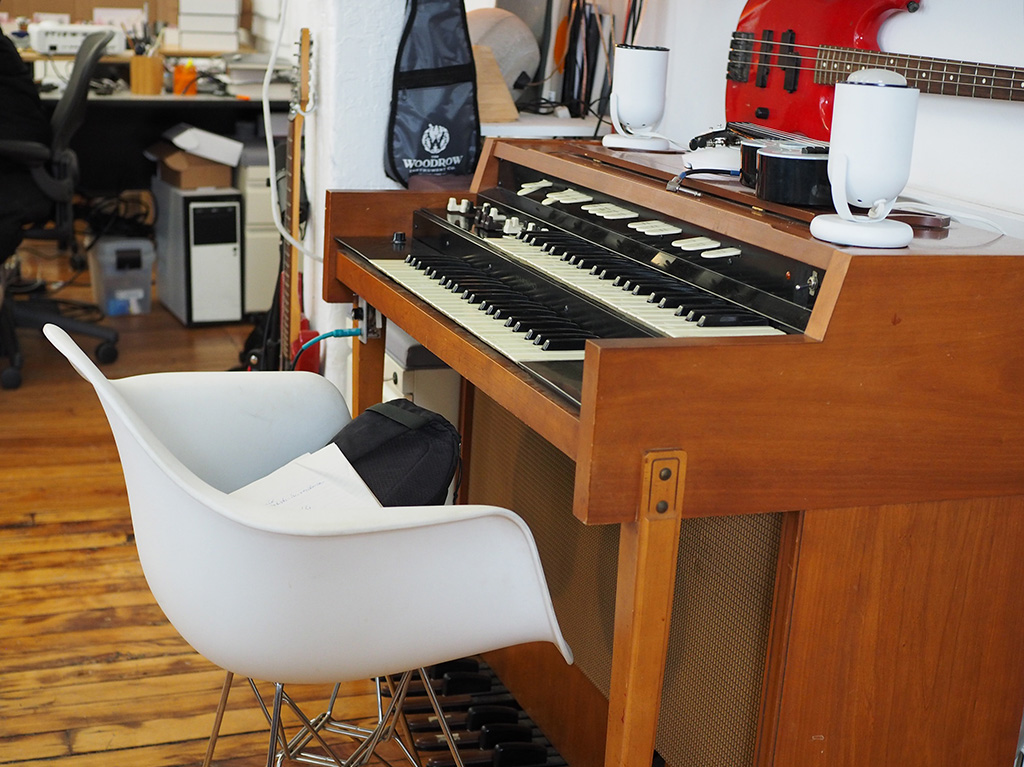 Many of Cambridge’s entrepreneurial spaces have close ties to MIT, the city or venture capital; Industry Lab and some others don’t. Prices in IL are usually low – more affordable for people and companies without venture capital. Tenants can rent only the space they need. At the lowest level, tariffs, including all amenities, are $ 487 per month for a “full table” and $ 336 per month for a smaller room with a “coding table”.

Industrial laboratory as a business

A mural recently made by Industry Lab near Norfolk Street, 288 (Photo: Andy Zucker)

The pandemic, when so many tenants were reluctant to spend time indoors with others, was not good for the Industry Lab business. Vaccinations have helped, and business is recovering.

A very high level of occupancy is needed for coworking businesses to make a profit, and leasing and re-leasing provide a small margin at best. In fact, Meyer said, “coworking is a terrible business.” He watched WeWork grow in hundreds of locations in dozens of countries and became the focus of investors, thinking it would be a major failure, he said. That this – at least before the foreign investor SoftBank rescued him – has been the subject of critical articles, books, documentaries and even upcoming theatrical TV mini-series.

“I don’t mind telling you we didn’t make money to talk about real estate,” Meyer said. However, he does not regret that he created the Industry Lab and during the pandemic decided to expand. Startups LeafLabs and Pickle Robots “would not exist without the Industry Lab and the social network that helped cultivate these companies”. Several tenants express similar sentiments.

Meyer appreciates talented people and the work they do. “For us,” he said, “return on investment has always been a community value.”